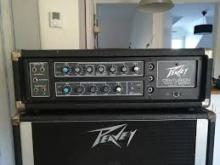 This is a war horse. A 130 watt solid state head and big 2 x 15" cab. The fondly remembered Peavey Black Widow speakers that were stock on these had a problem with the type of rubber in the surround and eventually started to disintegrate. We still have the originals and intend to recone them at some point in the future. But in the meantime the two 15" speakers have been replaced with a decent quality Chinese made PA 15"'s that sound great. Its a two channel bass amp with compression and parametric EQ, and channel switching! The solid state rectifier and rigidity of the response are what pedal steel players like about Peavey amps and this, with the twin 15's and big cab is a very cool space for steel! It also sounds surprisingly cool as a keyboard amp, not just organ and keyboard sounds but realistic open piano sounds as well. I often recommend it for rehearsal situations where keyboard players prefer to control their own volume in the room and just go with an amp. Or convince the pedal steel player that they haven't lived 'til they have both the solid state rectification and the 2 x 15" cab together in one package! This video is a fun demonstration, I told you these would be cool again some day!